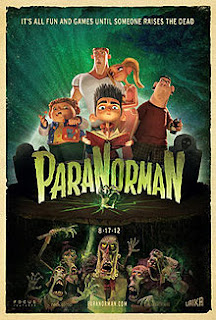 It probably says a lot about me that I like animated movies with dark elements. (Then again, this is a result of having a twisted mind.) But this is just who I am.

I opted to see Sam Fell and Chris Butler's ParaNorman, which shares many elements with that of The Nightmare Before Christmas. (It's evident in some scenes that Tim Burton is an influence.) The thing is though is that ParaNorman is much darker than any of the animated movies Burton was involved with.

As with most Hollywood animated movies, the cast is pretty darn good. Of the people involved, my favorites were Anna Kendrick and Casey Affleck in the often stereotyped roles of teenagers in a horror movie. I also have a fondness for Christopher Mintz-Plasse as the school bully. They just know what they're doing.

It's the small details that make everything come together. There's Jon Brion's very effective score which has a few echos to Danny Elfman. There's also the sly horror movies references that the older viewers will get. But I like how the town the movie is set in is clearly based on Salem, Massachusetts.

ParaNorman is really good. It's definitely not suitable for younger viewers, but it's perfect for the restless older kids. A few moments prevent it from being great, but that doesn't mean you shouldn't check it out.

My Rating: ****1/2
Posted by MovieNut14 at 10:45:00 PM
Email ThisBlogThis!Share to TwitterShare to FacebookShare to Pinterest
Labels: 2010s, movies, reviews