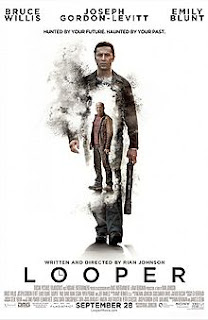 There are three directors I've taken a liking to that have made names for themselves in the last ten years. One is Ben Affleck, who is has definitely proven himself to be a better director than actor. The other is Steve McQueen, who is practically re-inventing cinema. (To answer your question, yes, I look forward to seeing Argo and Twelve Years a Slave.)

The third director is Rian Johnson. His debut Brick is one of the best noirs of the past fifteen years. His sophomore film The Brothers Bloom was a nice tribute to the crime capers of the 1960s. Both films also have very clever scripts written by Johnson, which is always a good sign for a promising director.

Johnson's newest film Looper is a sort of re-invention of the time travel film. (Johnson also has a strong penchant for blood throughout, but not in the same sense as Tarantino and Refn perhaps.) He also shows that you don't need to be a complete genius to understand a sci-fi film.

The main stars are pretty good. Joseph Gordon-Levitt continues to prove that he's a viable actor. Bruce Willis continues to prove he's not the kind of guy you want to fight. (He's John McClane, people. Don't mess.) Emily Blunt is good, even though the chemistry between her and Gordon-Levitt is lacking. (There's also some amusing supporting work from Jeff Daniels and Paul Dano.)

Looper is very good, but it has its flaws. It stumbles towards the end of the second act. A few parts you can see coming a mile away. (Definitely not including that ending.) That said, however, it's one of the best sci-fi films of the last decade. This deserves to be seen on the big screen.