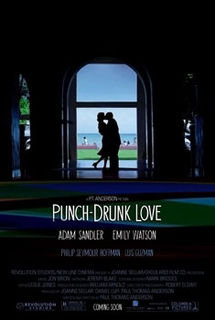 At times, the lead performer of a film is the last person you would expect to be in this kind of film or performance. But most of the time, it usually works out.

Surprisingly, Sandler is quite adept with drama. Okay, maybe not as adept as some of the other actors Anderson had worked with, but he's still good. Forget the mindless comedies he did in the 1990s. He shows some real acting chops here. (Can someone give him a good script again please?)

The film itself is also quite good. It feels a little quirkier than any of Anderson's other films, but I suppose that was intended. I approve of the use of Anderson regulars Philip Seymour Hoffman and Luis Guzman. The unconventional love story element is a nice touch too.

Punch-Drunk Love is something I honestly wasn't expecting, meaning I really didn't know if I would like it or not. Thankfully I did. It probably ranks as my second favorite Anderson film, my favorite being Boogie Nights. Re-watches are eminent, I swear it.