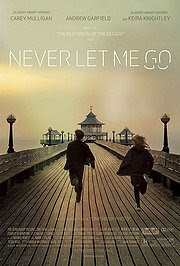 Mark Romanek's Never Let Me Go is a peculiar little film. It's a romance film with science fiction elements (or the other way around), which also acts as a character study.

Carey Mulligan is someone I've been watching since I first saw her in An Education two years earlier. As Kathy, Mulligan only confirms that she is an actress to keep an eye on. She displays a quiet sorrow in her features, which speaks greater volumes than her dialogue. It's performances like this that I just love.

After seeing his staggering performance in Death of a Salesman on Broadway earlier this year, I just knew that Andrew Garfield has potential. He plays Tommy as a young man with a child's perspective of the outside world, unaware of what it holds for him. The way he stares and holds himself is both mesmerizing and devastating.

Keira Knightley isn't exactly someone I'm overly fond of, but she did manage to mildly impress me here. As Ruth, she can be in control one minute and quietly broken the next. But she's easily overshadowed by her two younger co-stars.

It's slow early on, but Never Let Me Go builds up to something quite good. The final twenty minutes are just completely heartbreaking, and Rachel Portman's score is just fuel for that emotional fire. Seriously.

My Rating: ****1/2
Posted by MovieNut14 at 11:01:00 PM
Email ThisBlogThis!Share to TwitterShare to FacebookShare to Pinterest
Labels: 2010s, movies, reviews