Identification of a Woman 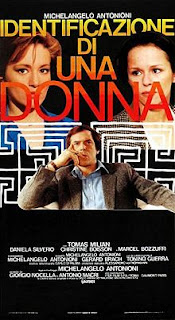 Niccolo (Tomas Milian), the protagonist of Michelangelo Antonioni's Identification of a Woman, is similar to that of Guido from Federico Fellini's 8 1/2. Both of their lives are at a standstill, both professionally and personally.

Guido has difficulty balancing his professional and personal lives. He has his film sorted out, but he just has no desire to make it. Throw in the fact his mind is almost never in the present or in reality, and it's clear to see why he's viewed as odd by some.

Now Niccolo is different. He is more focused on his personal life, especially since he's a recent divorcee. He's not only trying to get his life back on track, he's also trying to find inspiration for his next film. He's looking for it in the form of a woman's face.

Both men are similar in the sense that they need emotional (but mostly sexual) support from women. In fact, women play a key role in their lives. Guido had women leave an impact on him throughout his life; Niccolo just wants them for the sake of his work. The parallels between the two men could go and on, but I'll stop it here.

Back to the film itself. With this being my first glimpse into the inner workings of Antonioni's mind, I really had no idea what to look forward to. Was I satisfied? Sort of, but not on a grand scale. However, it did make me want to seek out other Antonioni films.