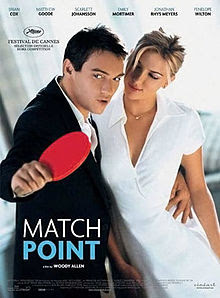 A good film is one where the dialogue plays as much of a role as the actors in it. That is always a key thing to listen for.

Woody Allen is one of those fortunate filmmakers who knows how to write a damn good film. Many of his films are comedies, other times romances. Regardless of the film, you can always count on fantastic dialogue from Allen.

His film Match Point, when in comparison to Annie Hall or The Purple Rose of Cairo, feels out of place. Rather than being a light comedy with snappy dialogue, this is the kind of film Alfred Hitchcock would have made. Honestly, what Chris (Jonathan Rhys-Meyers) and Nola (Scarlett Johansson) say to each other during their first encounter is worthy of the sly innuendos Hitchcock was famous for.

Speaking of Hitchcock, Rhys-Meyers and Johansson are just the kind of people Sir Alfred would've cast. (A good omen since Johansson will be playing Hitchcock blonde Janet Leigh later this year.) He is charming but is also hiding secrets. She is beautiful and has a few tricks up her sleeve. These are the kind of people commonly found in a Hitchcock film.

In all honesty, I had to keep reminding myself that this is a Woody Allen film. It's just so much darker than his other work. That doesn't mean it's not a great film; it very much is. Hell, it's one of the best titles of the last ten years.