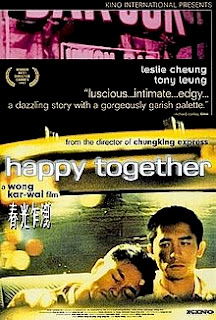 Many films depict a blossoming romance, a number of times they result in a happy ending. But what about those films about the fractured affairs, the ones on the verge of collapsing? Well, those are the ones Hollywood usually avoids. (They prefer "happy" movies.)

Films from other countries, however, do these kinds of films often. (Recently, England-born director Terence Davies depicted such an affair in The Deep Blue Sea.) Perhaps it's because filmmakers from non-US countries are more driven to tell a story than to make money. (Or that's just me.)

Wong Kar-Wai has depicted unreachable love in the forms of Chungking Express, In the Mood for Love and 2046. With Happy Together, he depicts the waning passion between a couple giving their relationship another go. They anticipate a rekindling, but all they get is a complete burnout.

Like Wong's other films, the vibrant use of color is present as is Christopher Doyle's gorgeous cinematography. Another noted aspect of Wong's films is the quiet subtly in the way the story is told. It's small details like that which keep me coming back for more from the director.

Happy Together, much like In the Mood for Love, displays a love that's present in the respective partners but they can't bring themselves to admit it. It's hypnotizing to see the anatomy of a relationship, especially since we don't see what started it in the first place. Who knows what forces brought these two people together?