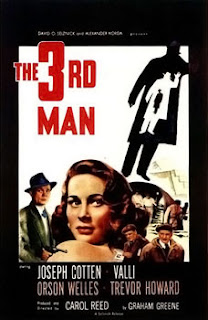 Pulp fiction writer Holly Martins (Joseph Cotten) is invited to Vienna by his friend Harry Lime (Welles). When he arrives, Martins finds out that Lime was killed after getting hit by a truck. Martins tries to figure out what happened the night Lime was killed by asking people that knew him very well.

The movie is noted for the "cuckoo clock" speech that Welles utters shortly after his character is revealed. It goes:

"You know what the fellow said--in Italy, for thirty years under the Borgias, they had warfare, terror, murder and bloodshed, but they produced Michelangelo, Leonardo da Vinci and the Renaissance. In Switzerland, they had brotherly love, they had five hundred years of democracy and peace--and what did that produce? The cuckoo clock."

Interesting bit of trivia: Welles ad-libbed that speech (and after the film's release, he was corrected by the Swiss saying "that they've never made any cuckoo clocks"). Bravo, Mr. Welles. Bravo.