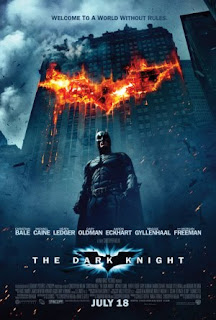 You were expecting this to come sooner or later, weren't you? Man, this post is going to be hard. Here goes nothing.

Set only a year after what happened in Batman Begins, The Dark Knight focuses on Bruce Wayne AKA Batman (Christian Bale) trying to keep crime under control in Gotham City with the aid of Lt. James Gordon (Gary Oldman) and newly appointed District Attorney Harvey Dent (Aaron Eckhart). The Joker (a creepy-as-hell Heath Ledger), a psychopathic criminal, starts to raise hell in Gotham.

Boy, this had to be interesting for Christopher Nolan. One minute he's an unknown director from England noted for his indie films, next minute he's the director of the biggest freakin' movie of the millenium.

It's a shame that Ledger didn't live to see the success of The Dark Knight. But like James Dean in Rebel Without a Cause, Ledger is forever immortalized with this movie, along with Brokeback Mountain.

Am I the only person who finds it a little weird ironic that Ledger used the movie A Clockwork Orange as a source for his role? Seems appropriate once you think of it: the lead villians are psychopaths that get kicks out of being violent toward others.

Bale was also good, but like Michael Keaton in the first two Batman movies, he was easily overshadowed by his villainous co-star. One thing that bugged me about Bale's performance (and I assume everyone else agrees with me here) is that voice. Ugh, that was so obnoxious. But the role wasn't bad overall.

Eckhart was also good. The look for Two-Face was downright disturbing but awesome. I mean compared to what Tommy Lee Jones had on his face in Batman Forever, Jones looks like he's wearing cheap Halloween makeup (and I think he is).