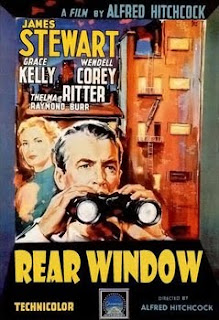 As I previously mentioned, I admitted I haven't seen a well-known movie by Alfred Hitchcock, Martin Scorsese and Billy Wilder. I'm proud to say that I have finally caught up with the rest of the world last night and finally saw Rear Window.
Photographer L.B. Jeffries (James Stewart) is recovering from a broken leg, and he finds a way to kill his time: spy on his neighbors from his apartment. His suspicion starts to grows when he believes that Lars Thorwald (Raymond Burr), a neighbor across the courtyard, has murdered his bedridden wife. At first no one believes him, but soon his nurse Stella (Thelma Ritter) and girlfriend Lisa (Grace Kelly) are convinced that Thorwald killed his wife.

Stewart's performance was very good, as was Kelly's. Hitchcock's direction of the movie was great as well.