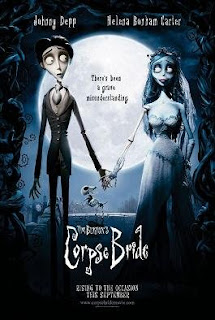 In 2005, Tim Burton had two successes with his frequent collaborator Johnny Depp. The first was the uber-quirky Charlie and the Chocolate Factory, which made almost $500 million dollars worldwide. The second was Corpse Bride, which managed to get an Oscar nod for Best Animated Film.

Corpse Bride focuses on Victor Van Dort (Depp), a nervous young man who's to marry Victoria Everglot (Emily Watson), a young woman who's part of the most royal family in town. Their parents arranged the marriage so the Van Dorts can be high in society and the Everglots do it for the money. Having never seen Victoria before, Victor isn't too fond of the idea.
At the marriage rehersal, Victor forgets his vows. After getting disgraced, he heads off to the woods to practice the vows. He then gets them right, and finds himself married to Emily (Helena Bonham Carter), a woman who was murdered on the night of her wedding. Emily claims that she and Victor are husband and wife, and she takes him to the Land of the Dead.

Has Burton and Depp ever done a movie and it stunk? Well, since I've seen every movie they've done together and that's definitely a no. But when I saw this when it was in theaters, it didn't leave that big an impact on me. It wasn't until I re-watched it last Halloween that I realized how good it was.

Suggestion: Watch this as a double feature with The Nightmare Before Christmas.

My Rating: ****
Posted by MovieNut14 at 12:00:00 AM
Email ThisBlogThis!Share to TwitterShare to FacebookShare to Pinterest
Labels: 2000s, director: Tim Burton, movies, reviews