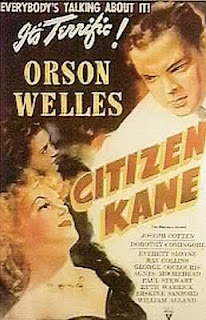 Twenty-nine years ago today, famed movie director Orson Welles died of a heart attack just hours after his final interview. He was 80. In honor of his talent I've decided to review two of Welles' best-known works today, starting with his directorial debut Citizen Kane.

Newspaper mogul Charles Foster Kane (Welles) dies after uttering "Rosebud". The news of his death causes a media frenzy, particularly over his final word. Reporter Jerry Thompson (William Alland) tries to find out about Kane's life and the meaning of his last word. Flashbacks show Kane's childhood, his rise in the newspaper business, his failed marriages and his descent in life.

This movie is considered "the greatest movie ever made", and in some ways I sort of agree with the claim. I mean, the movie's good but I think all of the hype surrounding it kills the movie.