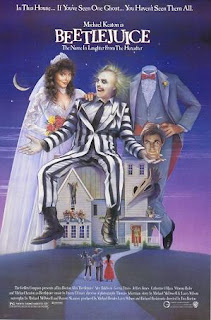 The 1988 movie Beetlejuice is completely different from anything else I've seen. And that's a good thing.

Adam Maitland (Alec Baldwin) and his wife Barbara (Geena Davis) are killed by driving off a bridge. They manage to walk back to their New England home, but they don't know how they got back. They find out they now haunt their home, which gets sold to the Deetzes, a yuppie family from New York City. Delia (Catherine O'Hara) is an aspiring sculptor, her husband Charles (Jeffrey Jones) a real estate idea man, Otho (Glenn Shadix) is the interior decorator of the Deetzes, and Lydia (Winona Ryder) is the gothic daughter of Delia and Charles, who later becomes friends with the Maitlands. After several failed attempts of scaring off the Deetzes, the Maitlands fall under the temptation of Betelgeuse (Michael Keaton), a bio-exorcist. They find his attempts are too dangerous,so they try to save the Deetzes.

This is definitely a Tim Burton movie. Some elements from this movie can be seen in his later works.

My Rating: *****
Posted by MovieNut14 at 12:00:00 AM
Email ThisBlogThis!Share to TwitterShare to FacebookShare to Pinterest
Labels: 1980s, director: Tim Burton, movies, reviews