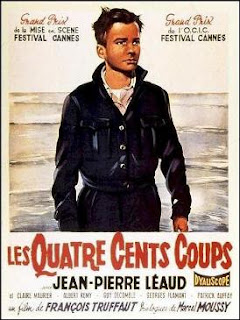 Twenty-five years ago today, French film director Francois Truffant died of a brain tumor. He was 52. In honor of this famed filmmaker I have decided to review his best-known work, his directorial debut The 400 Blows (which also turns 50 this year).

Antoine Doinel (Jean-Pierre Leaud) is a young teenager who always seems to be getting into trouble, whether at home or at school. He skips school and roams throughout Paris, which only gets him into more trouble.

As all hardcore cinephiles know, The 400 Blows was one of the first films of the French New Wave. The French New Wave marked a turning point in cinema, with the New Hollywood era starting less than a decade later.

I appreciate the movie very much, but I believe the movie was from Antoine's point of view. I mean, there is no way an adult can abuse a child that much and get away with it. Before I go into a ranting frenzy, I'll say what I liked. The images of Paris are beautifully shot in black and white, the acting is good, and the dialogue is smart.

My Rating: *****
Posted by MovieNut14 at 3:00:00 AM
Email ThisBlogThis!Share to TwitterShare to FacebookShare to Pinterest
Labels: 1950s, director: François Truffaut, movies, reviews