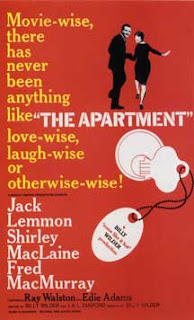 Having just covered one Billy Wilder movie, I thought I might do another one.

C.C. "Bud" Baxter (Jack Lemmon) is a popular employee at an insurance agency. He's popular because he loans out his apartment to other employees for their (ahem) "other business". Because of this, Baxter's neighbors think he's a Don Juan. Baxter has an interest in elevator girl Fran Kubelik (Shirley MacLaine), but becomes heartbroken when he finds out that she's seeing his boss Jeff D. Sheldrake (Fred MacMurray). After a failed date at Baxter's apartment with Sheldrake, Fran tries to commit suicide. As she's recovering, Baxter interest in her comes back.

It felt kinda weird for me to watch a comedy from Billy Wilder, since just a few months before I saw a very serious drama by him. But it definitely pays off. The dialogue is clever, the acting is great, and the movie is one for the ages.

My Rating: *****
Posted by MovieNut14 at 9:59:00 AM
Email ThisBlogThis!Share to TwitterShare to FacebookShare to Pinterest
Labels: 1960s, director: Billy Wilder, movies, reviews