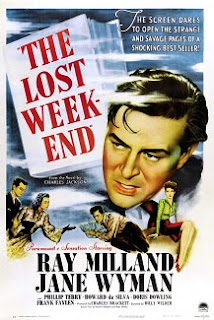 When the name Billy Wilder is mentioned, the most common movie titles thought are Some Like It Hot and The Apartment. But Mr. Wilder did more than the occasional comedy. He did film noir (Double Indemnity), war (Stalag 17), and drama (Witness for the Prosecution). Another drama from him is The Lost Weekend.

Don Birnam (Ray Milland), a struggling writer and long-time alcoholic, is planning to leave on a trip with his brother Wick (Phillip Terry) for the weekend. Don has been on the wagon for over a week, but his cravings are starting to control him. He manages to evade going on the trip, and he begins a weekend long drinking binge. His girlfriend Helen (Jane Wyman) grows concerned about Don, but he choses booze over Helen as he slowly descends into self-destruction.

The Lost Weekend is considered a landmark film because it was one of the first movies to discuss the topic of alcoholism. Later movies focusing on the same topic, such as Days of Wine and Roses and Leaving Las Vegas, feature nods to Wilder's movie.