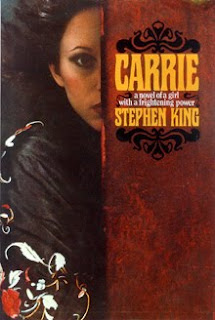 Happy Halloween! Expect a number of horror-related posts today. Perhaps something to watch this evening. But I'll start with a Stephen King novel.

Carrie White has a rough life. She teased at school by her peers and her over-religious mother abuses her at home. Fortunately for her, she has telekinetic powers that nobody knows about.

Stephen King was originally working on it as a short story back in the 1970's, but he didn't like where the story was going so he threw what he had in the trash. It was his wife that convinced him to keep working on the story. Interesting, huh?

My Rating: ****
Posted by MovieNut14 at 12:00:00 AM
Email ThisBlogThis!Share to TwitterShare to FacebookShare to Pinterest
Labels: books, reviews, writer: Stephen King