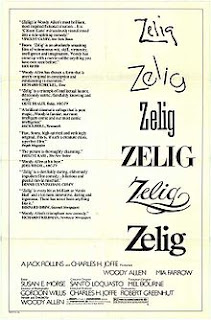 Woody Allen has a certain sense of humor that everyone knows about. It consists of a few sly jokes inserted into the compelling story.

Such is the case with his 1983 film Zelig. A mockumentary on human chameleon Leonard Zelig (Allen), it chronicles the bizarre life Zelig had as from media sensation to sideshow freak.

Years before Christopher Guest practically nailed it down to a science, Allen has a good idea of what a mockumentary should be like. The archival footage looks aged as though it was actually from the 1930's. A great feat for a film from the 1980's.

Allen also shows in Zelig the effects of celebrity on society. Zelig himself is catapulted into stardom upon the discovery of his condition. He doesn't mind it at first, but then it becomes too much to handle. Happens all the time in real life too.

Zelig is definitely one of Allen's best films. It has a great balance of satire and heart, a common theme among Allen's work. Allen is great, as with Mia Farrow. Just goes to show that Allen knows how to make a good film.