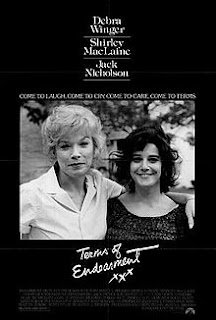 The early scenes of James L. Brooks' Terms of Endearment shows the tension between Aurora (Shirley MacLaine) and Emma Greenway (Debra Winger). They constantly bicker over Emma's life but like every mother and daughter, they love each other.

When Emma marries and moves away, Aurora finds herself without much to do. Enter Garrett Breedlove (Jack Nicholson), a former astronaut and her new neighbor. She is at first a little disgusted by his habits but as time wears on (and she gets older), she manages to overlook them.

She doesn't let Emma get away so easily however. As Emma has kids and continually struggles with money, Aurora, being the mother that she is, gives her both a scorning and words of encouragement. Emma toughens up and deals with her mother's bickering, yet you can tell she still loves Aurora. (She is her mother after all.)

Brooks made his directing debut with Terms of Endearment, and that fact is a tad evident throughout. Indeed he can balance out humor and heartbreak, though the latter does tend to overwhelm the former. He does hit the right notes in the third act however.

Terms of Endearment, although melodramatic in parts, is very well done. MacLaine, Winger and Nicholson give great performances. Also, the final exchange between MacLaine and Winger is bound to reduce you to a blubbering mess.

My Rating: ****1/2
Posted by MovieNut14 at 4:35:00 PM
Email ThisBlogThis!Share to TwitterShare to FacebookShare to Pinterest
Labels: 1980s, movies, reviews