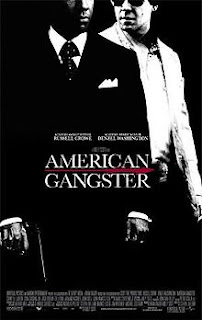 Ridley Scott's American Gangster depicts the two sides of one world.  White and black. Right and wrong. Good and evil.

The film focuses on the rise of drug lord Frank Lucas (Denzel Washington). He was the gangster of the Harlem criminal underworld during the Vietnam era. That is, until Ritchie Roberts (Russell Crowe) seeks to bring him down.

Washington portrays Lucas as someone who's low key and calculating. He never flaunts his wealth and success in public. He is careful with the distribution of the heroin. In short, he knows what he's doing.

Crowe portrays Roberts as a man trying rectify many wrongs. A pariah among his department, he's looking for a way to be respected by his fellow officers again. (It's not as easy as it sounds.) Once Lucas catches his eye, he knows what to do to get the respect back.

American Gangster definitely captures the true crime aspect. (After all, Lucas and Roberts themselves were creative consultants.) Not exactly much else apart from good work from Washington and Crowe, but at least Scott makes an effort here. Still, a look wouldn't hurt.