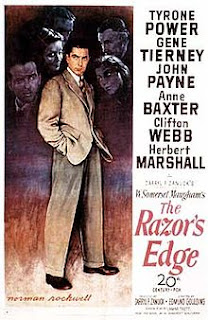 In the opening scene of Edmund Goulding's The Razor's Edge, a serene, cheerful gathering is shown. Among the guests are couple Larry Darrell (Tyrone Power) and Isabel Bradley (Gene Tierney). Yet later in that same scene, it is revealed that Larry is a very conflicted person.

What made him this way? A veteran of World War I, he realizes upon his return home how precious life is. Unfortunately for him, Isabel doesn't share the same feelings as him on the subject. In fact, they don't really express many similar beliefs. (No surprise they eventually broke up.)

One such instance is in regards to Sophie MacDonald (Anne Baxter), an old friend to both of them. She becomes a broken woman (and an alcoholic) when her husband dies, and Larry can't help but feel sorry for her. Both have shattered views on life, something Isabel can't fully grasp.

Isabel is really something. She seems unable to understand any emotions except her own. She is the one who ends the relationship with Larry, not him. And yet the feelings she had for him bubble back to the surface when he becomes supportive to Sophie, whom she abhors deeply. In short, Isabel is an ice queen.

The Razor's Edge really has the viewer thinking about the meaning of life, something all too common in some of today's films but completely new to 1946 audiences. Power, Tierney, Baxter and Clifton Webb (gotta love his pithy commentary) give great performances in a film that raises many questions on existence.