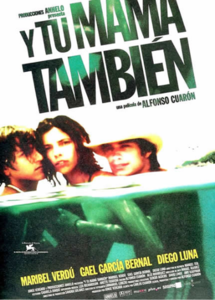 The introduction to protagonists Tenoch (Diego Luna) and Julio (Gael Garcia Bernal) has them doing the very thing they constantly crave: sex. (They're teenagers. What do you expect?)  The rest of Alfonso Cuaron's enticing film shows the two trying to find themselves.

Tenoch and Julio, both temporarily free from their girlfriends for the summer, strive to do something memorable. But what exactly? Drugs? They do those on occasion already. Parties? Same. A trip? There's a thought.

Enter Luisa (Maribel Verdu), the wife of Tenoch's cousin. Think of her as a much sadder Mrs. Robinson. She is an independent woman but she doesn't (or doesn't want to) grasp it. She feels more comfortable when in the presence of a man. The reverse could be applied to both Tenoch and Julio.

Throughout their trek, secrets are revealed, those one would take to their grave. Cuaron's script ensures that the reactions to these revelations are honest, not overdone. Same could be said for the sex scenes. Cuaron makes sure that those scenes have a sense of meaning rather than being pornographic or mechanical.

Y Tu Mama Tambien is a very captivating film, much in the same sense as Almodovar's Talk to Her and Bertolucci's Last Tango in Paris. All three films focus on the characters' burning desires for others and how they use it to escape reality. It may be in Spanish, but nothing gets lost in translation here.