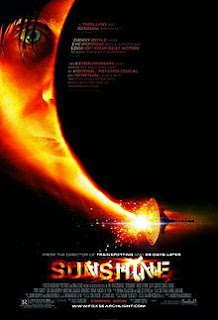 Ever since Stanley Kubrick's 2001: A Space Odyssey was released back in 1968, there have been a number of science fiction trying to capture the blend of humanity and outer space. Several of them have gotten to the psychological root of it all, especially Danny Boyle's Sunshine.

The film focuses on many topics, such as theology, atheism and the importance of life. Let's start off with the latter topic. The crew is sent off to drop a nuclear bomb into the dying sun. A previous mission tried and failed to do the task. It's up to the second crew to save the human race from extinction.

Many thoughts towards the importance of life could be put into perspective here, but let's focus on one of them. The reason for why there is life is to make an impact on the world. Without life, there is nothing to speak of.

But what about the theology and atheism perspectives? Ah, now that's an interesting one. One of the characters, whose identity I'll keep anonymous, loses grips with reality and feels if the mission is aborted, they will get closer to God. None of the other characters feel that way. Are they atheists or aren't they?

Sunshine is quite good. The music is unbelievably haunting as with the whole premise. Some people had problems with the third act, but not me. I liked it.