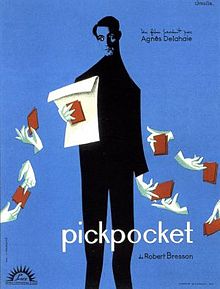 When one watches Michel (Martin LaSalle) sneaking his fingers into a woman's purse or a man's pocket, there's that feeling of suspense you normally find in a Hitchcock film. You know what he's doing isn't right yet you can't help but hope he'll get away with it.

Michel is really something. A gaunt figure in a size too big suit, he appears devoid of any emotion, his face blank of expression. Yet it's his eyes that show what his face cannot, all the fear and joy from the robberies he has committed.

There's no clear reason as to why Michel is a pickpocket. He views it as the easiest way to get money. Sure, getting a steady job is the best (and legal) way but you have to admit, you'd probably do the same thing if you were desperate.

Director Robert Bresson doesn't make Michel a sympathetic or unsympathetic figure. Feelings towards him are neutral at most, however that is not entirely a bad thing. It gives the viewer more of a chance to watch the film and Michel's actions.

Pickpocket is a really great film. It captures the inner workings of a criminal, something that many lated films strived to capture as well. In short, a must for true cinephiles.

My Rating: *****
Posted by MovieNut14 at 8:05:00 AM
Email ThisBlogThis!Share to TwitterShare to FacebookShare to Pinterest
Labels: 1950s, movies, reviews