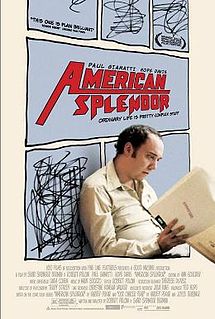 What American Splendor offers is a portrait of a man who first is unaffected by society then eventually offended by it.

The man is Harvey Pekar (Paul Giamatti), the famous comic book writer who passed away back in 2010. Harvey at first didn't particularly mind that his life was the definition of mundane. It wasn't until he became a recognizable name that he realized it.

Harvey marries Joyce (Hope Davis), a fellow comic book lover who's just as messed up as him. Harvey doesn't mind; all he really wanted was some companionship. (Joyce also provides some inspiration for Harvey, even if it puts an awkward dent int their relationship.)

American Splendor is different from most biopics in that it doesn't glamorize (or in some cases de-glamorize) its subject. Instead, it treats Harvey as a normal person who just got lucky. In all honesty, that was Harvey to begin with.

All in all, American Splendor is very good. Giamatti and Davis give top notch performances. However, it felt a little dry in some scenes. Still, Shari Springer Berman and Robert Pulcini know how to make a good film.

My Rating: ****1/2
Posted by MovieNut14 at 10:59:00 PM
Email ThisBlogThis!Share to TwitterShare to FacebookShare to Pinterest
Labels: 2000s, movies, reviews