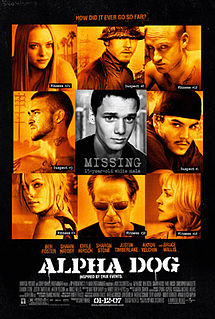 With his father being the pioneer of independent film, one would imagine that Nick Cassavetes possesses the same skill as John. In a way, he does in regards with focus on certain characters. Yet his films don't have the same edge as his father's.

He tries to with Alpha Dog, but doesn't even get close to the minimum level. John captured an emotional intensity in his work while Nick unsuccessfully tries to get that intensity within the profanity-laced dialogue. Just goes to show that some things are better left unchanged.

Alpha Dog is based on the actions of Jesse James Hollywood. (Names were changed for the film.) Hollywood by all accounts was the kind of guy you don't mess with. You mess with him, he will get his gang to go after you.

The cast is star-studded and they manage to work with what little material they have. Of them, the best work in my opinion came from Anton Yelchin as Zack Mazursky, the unfortunate target of Johnny Truelove (Emile Hirsch). An uncorrputed figure among the characters, it's heartbreaking to see him in his final moments. Extra kudos to Ben Foster for portraying someone neck deep in drug addiction.

Apart from a few redeeming moments, Alpha Dog just completely falls to pieces throughout. What should have been a gripping view into a notorious crime instead becomes a poor re-enactment. Then again, what does one expect from the same man who directed The Notebook?

My Rating: ***1/2
Posted by MovieNut14 at 2:47:00 PM
Email ThisBlogThis!Share to TwitterShare to FacebookShare to Pinterest
Labels: 2000s, movies, reviews