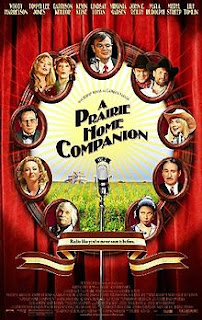 Films focusing on one or two characters are good but even better when films have ensemble casts. There's just something so engaging about watching at least a dozen different characters in one film.

Not many directors can work with ensemble casts. Robert Altman was a master with them. He would have some of the biggest names in his films, ranging from Oscar winners to character actors. Let's face it: was there anyone who didn't work for Altman?

The cast for his swan song A Prairie Home Companion is a hell of an ensemble. The names include Meryl Streep, Kevin Kline, Lily Tomlin, Woody Harrelson, John C. Reilly, Lindsay Lohan, Tommy Lee Jones, Garrison Keillor (host of the real A Prairie Home Companion), Virginia Madsen and Maya Rudolph. They play their parts extremely well, but my favorite's Kline for his deadpan deliveries. (He honestly needs to be in more movies.)

Even with the film's focus on a radio show's final broadcast, Altman doesn't dwell on that fact. He instead treats the broadcast as an average one rather than the last. In fact, the characters don't even (or want to) treat it as the last either. They just view it as another broadcast among friends.

A Prairie Home Companion is one of those films that has the viewer forget their worries. It's just so lighthearted and fun to watch. And to think this is from the same man responsible for much darker films like MASH, The Player and Gosford Park. (Also, the life and death metaphor throughout the film is pretty good.)