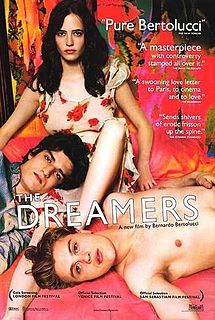 Billy Wilder once said, "What critics call dirty in our movies, they call lusty in foreign films." Indeed Bernardo Bertolucci's The Dreamers does cross that very fine line between the two terms frequently, but there is so much more than sex.

The Dreamers focuses on Matthew (Michael Pitt), an American studying in Paris at the peak of the 1968 student riots. He meets Isabelle (Eva Green) and Theo (Louis Garrel), and instantly forms a bond with them because of their shared interest in film. It's not long before Matthew realizes Isabelle and Theo have their own way of having fun.

Many moments in The Dreamers focus heavily on the bond between the three. Jealously seeps in rather quickly. Theo feels threatened when Matthew falls in love with Isabelle, who gets crushed when she overhears Theo in bed with another woman. Indeed Matthew feels uncomfortable by Theo's constant presence but never threatened.

There's no real explanation as to why Isabelle and Theo act this way. Apart from going to the movies, maybe it's their way of escaping reality. But no one knows except for them.