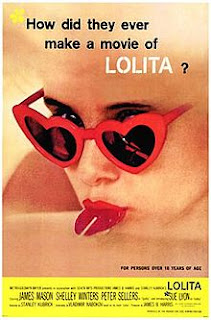 In regards with Lolita, Vladimir Nabokov and Stanley Kubrick are complete opposites. Nabokov is poetic with his words while Kubrick is blunt with his vision. Despite their very distinct differences, they both manage to weave together a tale of a consuming obsession.

The way Nabokov writes this story is with lyrical musings by its narrator. Indeed the words are beautiful, but I have a notion Nabokov tended to get a little carried away with his writing.

And when Kubrick had the right mind to turn Lolita into a film, he faced a number of obstacles. Re-working the heavily obscene material into something the censors would approve of was next to impossible. And yet he manages to succeed somewhat.

Indeed there are the expected tweaks found too commonly in among Kubrick's adaptations, but it still captures how demented the human mind can become. Both the novel and the film have their own charms but since they are on different spectrums, it's hard to say which is better. The film is easier to understand yet the novel has more atmosphere to it. See? Hard to choose.

What's worth checking out?: I'd go with both.
Posted by MovieNut14 at 11:32:00 PM
Email ThisBlogThis!Share to TwitterShare to FacebookShare to Pinterest
Labels: book vs. movie, director: Stanley Kubrick, reviews