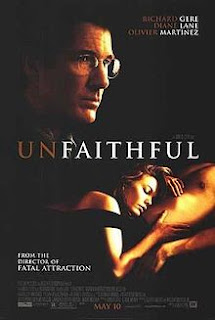 One can't help but notice a few parallels between Adrian Lyne's Unfaithful and his earlier film Fatal Attraction. Both, after all, focus on the dangerous side of extramarital affairs. However, the differences are just as noticeable.

Connie Sumner (Diane Lane) has a respectable life. Her husband Edward (Richard Gere) loves her and she seems content with her status as a stay-at-home mom. Then she meets Paul (Oliver Martinez), which starts off friendly then quickly becomes something else.

Here's where the parallels with Fatal Attraction come in. Like Dan, Connie probably started the affair with Paul just to change things up. She probably got bored with being a wife and mother, and maybe Paul makes her feel younger.

And the differences come into play now. Unlike Dan, Connie can't bring herself to end the affair. In fact, she's more like Alex in regards with the affair. (She lashes out violently when she sees Paul with another woman.) And saying the two films vary violence-wise...well, it depends strictly on one's viewpoint.

Unfaithful has its flaws amongst the script and character structure but it makes up with the performances from Lane and Gere. Lyne, although he provides a better view with Fatal Attraction, gives his audience a look at how poisonous infidelity can become.

My Rating: ****
Posted by MovieNut14 at 4:37:00 PM
Email ThisBlogThis!Share to TwitterShare to FacebookShare to Pinterest
Labels: 2000s, movies, reviews