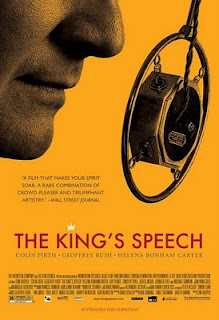 Tom Hooper's The King's Speech by some standards appears to have everything that qualifies for an Oscar film (ie, lead character overcoming disability, based on real events, British royalty, etc.). Harvey Weinstein being a driving force for its awards campaign is another contributor. When you look past those small details, there is a very good film.

The film focuses on Prince Albert, Duke of York (Colin Firth) and his troubled rise to the throne as King George VI. Troubled because he suffers from a stammer that makes it embarrassing for him to speak, and because his family expects much from him. With the aid of speech therapist Lionel Logue (Geoffrey Rush), and the support of his wife Elizabeth (Helena Bonham Carter), he manages to control his stammer.

Okay, cliches all over, but just try to place yourself in Albert's shoes. Day in and day out, he listens to people of power while he remains a man of few words in fear of being looked down upon. In his own words, it's daunting "Because the nation believes that when I speak, I speak for them. But I can't speak."

The subplot's interesting. It focuses for a while on Albert's brother Edward, Prince of Wales (Guy Pearce). Foe those unaware of what sort of firestorm he conjured up, he was involved with a married woman. (The story is told in greater detail in W.E..) You can tell Edward's undergoing a great deal of stress.

The King Speech is quite good though not as great as some might say. Firth is very good, though he still should have won for A Single Man instead. All in all, a good display of acting is shown here.

My Rating: ****1/2
Posted by MovieNut14 at 7:21:00 PM
Email ThisBlogThis!Share to TwitterShare to FacebookShare to Pinterest
Labels: 2010s, movies, reviews