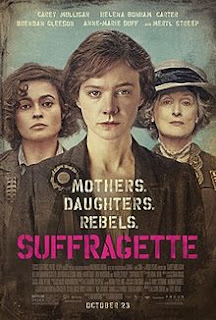 You'd think by now as we approach the end of 2015 that we as a society would more equal. Alas, the steps towards total equality have been laden with pitfalls of varying degrees. Unfortunately the world we are a part of is still rampantly racist, sexist, homophobic and heavily bigoted.

Sarah Gavron's Suffragette shows how slow the progress  has been over the last century. (Towards the end of the film, there's an appallingly small list featuring when countries gave women the right to vote, the most recent year being 2015.) But even with the few results we get, they've been effective. (After all, this past summer the United States legalized same-sex marriage.)

Abi Morgan's script is one clearly brimming with anger. She writes about how unfair life as a woman was in the previous century, how they reduced to nothing more than servants or objects to men. Both she and Gavron show how women both then and now are not the dainty figures we appear to be.

And as proven by other works penned by Morgan, Suffragette features a strong roster of actors. Featuring the likes of Carey Mulligan, Helena Bonham Carter, Anne-Marie Duff, Brendan Gleeson, Ben Whishaw and Romola Garai (even Meryl Streep in a lone scene), it shows how tantalizing a good script is to the right actors. (Though it would've been nice on both Gavron and Morgan's parts to have some actors of color amongst the cast.)

Suffragette is a very gripping film and it shows there was more to the story than what the history books tell you. Though the plot loses its way from time to time, the work from the various women involved proves that it's a film that should be acknowledged.

My Rating: ****1/2
Posted by MovieNut14 at 10:23:00 PM
Email ThisBlogThis!Share to TwitterShare to FacebookShare to Pinterest
Labels: 2010s, directed by women, movies, reviews