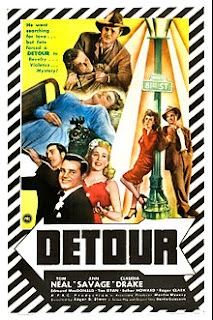 Edgar G. Ulmer's Detour opens with piano player Al Roberts (Tom Neal) lamenting over the end of his relationship with singer Sue Harvey (Claudia Drake), who left him for a shot at Hollywood. Now he's hitch-hiking to California but as he gets closer to being with Sue again, trouble crosses his path. And then Vera (Ann Savage) enters his life.

Indeed many elements of Detour just scream B-movie but does that matter in the long run? Not particularly because Ulmer manages to make a film that, despite its cheap appearance, is quite effective. (Hey, looks can be deceiving, you know.)

Speaking of which, that could easily describe Vera. She at first glance looks like a girl that you'd pass by on the street without a second thought. But the moment she locks eyes with and speaks to you, it's clear she's anything but. With her fiery glare and brassy voice, she's not someone you want to get on the bad side of. (And she's rarely in a pleasant mood.)

There's also a shift in gender roles between Al and Vera. Usually with noirs, men are the vicious ones while the women just stay in the background looking pretty. Not in Detour. Al just goes along with Vera's bossy attitude, even when his tolerance towards her starts to dwindle. (Just pointing this out, this was released the same year as Scarlet Street.)

Detour shows that an effective film noir can be possible with a small budget and a short production schedule. That said, there are some flaws within the final result. (The somewhat choppy editing, for starters.) Still, Detour is worth a look.

My Rating: ****
Posted by MovieNut14 at 10:24:00 PM
Email ThisBlogThis!Share to TwitterShare to FacebookShare to Pinterest
Labels: 1940s, movies, reviews