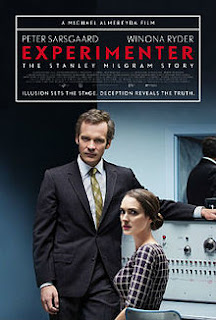 We as a society are constantly changing. What was once taboo is now part of everyday life (and vice versa). Our opinions shift as the years pass but even then there are some things that remain unchanged.

When it comes to human psychology, we're always fascinated by various studies from the field whether it's because of the subject matter or the controversy that followed suit. Michael Almereyda's Experimenter focuses on the various studies conducted by Stanley Milgram. And all these years later, we're still fascinated by the results.

Much like how Kinsey and Masters of Sex highlighted how their respective researchers changed how the world viewed sexual behavior, Experimenter highlights how Milgram's infamous study still resonates decades later. It's a study that examines human behavior under the control of others, one that asks the question, what are the limits for a human?

Unlike your standard "based on real events" film, Experimenter plays with different formats of storytelling. The fourth wall is regularly broken, some set designs appear more like they're from a play...by many means this was Almereyda's decision to experiment with his film (and he frequently does with his other work). It just adds to the film's nature.

Experimenter is a curious film in many regards. It neither celebrates nor condemns Milgram's actions, and it does mention the long-term effects of his work. Peter Sarsgaard's performance as Milgram also showcases that the actor is one of the best working today. And the film itself is most definitely one that you should seek out.

My Rating: ****1/2
Posted by MovieNut14 at 10:09:00 PM
Email ThisBlogThis!Share to TwitterShare to FacebookShare to Pinterest
Labels: 2010s, movies, reviews