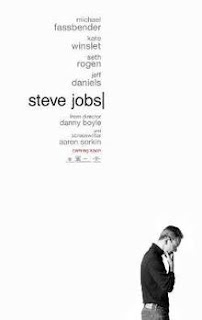 Whenever a prominent name gets the biopic treatment, it usually involves the writer(s) cleaning up certain details of the subject's life to make the film a little more...presentable. (*cough* Saving Mr. Banks *cough*) Obviously this is a way to appease both moviegoers and the censors but sometimes the more appealing details of the subject's life are the ones omitted.

So how does Danny Boyle's Steve Jobs fare? It may sound cheap to focus on a subject who passed away recently (not to mention if the new biopic is one of several projects on the subject). But if said project is effective, the cheap feeling dwindles down to nothing. But does Steve Jobs manage to be effective?

It's Aaron Sorkin's script that makes Steve Jobs excel to the highest level. In contrast to his work for The Social Network, Sorkin has a more acerbic tone throughout. (In comparison to The Social Network, Sorkin depicts Jobs as a headstrong thinker who has more enemies than allies because of his demeanor.) It's also proof that Sorkin is one of the best writers working today.

And the performances in Steve Jobs make the film excel even further. The work from Kate Winslet, Seth Rogen, Michael Stuhlbarg and Jeff Daniels in particular are very well done but this show belongs to Michael Fassbender, who has certainly proven in recent years that he's one of the best actors working today. ("I'm poorly made.")

Steve Jobs is one of those films where you're half-expecting it to fall apart at some point but miraculously it never happens. Every element works wonders. (Warning for those with epilepsy: the last scene has a long sequence featuring various flashing lights.)