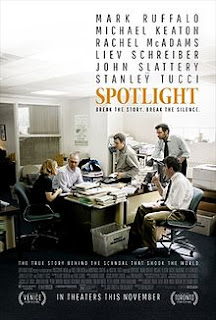 All the President's Men. The Insider. Almost Famous. These are a few of the prominent films that focus on the world of journalism. Between and since their releases, there have been other films of a similar nature with varying degrees of success. Though there have been a few that managed to stand out.

So where does Tom McCarthy's Spotlight rank? Chronicling the coverage of a vast sex abuse scandal in Boston, the film strays away from being gentle about the subject matter. (If it did, you could easily see the film's quality dwindle.)

There's a certain detail throughout Spotlight that adds to the film's impact. Being about a scandal through the Catholic Church, its presence is known within various scenes. How so? Throughout various exterior shots, a church can be seen within the background. A nice touch from McCarthy.

And the actors McCarthy got for his film...good God. Every single one of them never waste a single moment when they're on screen whether it's one of the stars or an actor with one scene. It's not that often you see a film use all of its actors effectively.

Spotlight is one of those rare well-crafted films where all of its elements sing like a symphony. Every note of it works wonders, something that has to be done with fine precision. And everyone involved is at the top of their game here.

My Rating: *****
Posted by MovieNut14 at 10:28:00 PM
Email ThisBlogThis!Share to TwitterShare to FacebookShare to Pinterest
Labels: 2010s, movies, reviews