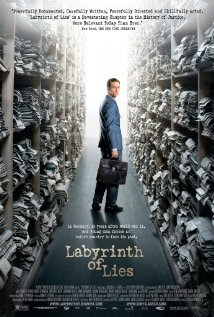 There have been many horrors throughout history. Many of said horrors were perpetrated by people who were the epitome of evil. And in many of these instances, these monsters looked like they could be next door to you.

This point becomes the driving force once Giulio Ricciarelli's Labyrinth of Lies takes off. Set in the years following the end of World War II, it chronicles the journey to bring those responsible for the atrocities the Nazi Party committed. A task easier said than done.

As proven throughout history, there are those ashamed of their past actions. As shown throughout Labyrinth of Lies, the Germans of an older generation would best like to forget the war they lost. This further complicates matters for our protagonist (a composite of three lawyers from the real-life trial) but it doesn't stop him. Even if it alienates him from those around him, he still wants justice for the innocents.

And as Labyrinth of Lies wears on, it takes on a more paranoid nature. Makes sense because for our protagonist, he only has a small group of allies. How many of them can he actually trust? Knowing the world he's a part of, it leaves you wondering.

Labyrinth of Lies focuses on a country's misdeeds in a (mostly) unflinching light. (Apart from testimony from those who survived, what happened to the many victims of the Holocaust isn't shown or mentioned.) Ricciarelli does prove that one's actions can come with consequences and while not on the same scale as Judgment at Nuremberg, the film does add a new perspective on a dark spot in history.

My Rating: ****1/2
Posted by MovieNut14 at 10:11:00 PM
Email ThisBlogThis!Share to TwitterShare to FacebookShare to Pinterest
Labels: 2010s, movies, reviews