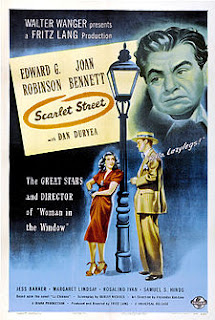 It's clear early on in Fritz Lang's Scarlet Street that Edward G. Robinson is in a different type of role than his usual tough guy fare. His character of Christopher Cross is decidedly more sensible than the likes of Rico or Johnny Rocco. Then he crosses paths with Kitty March (Joan Bennett).

Despite being married (albeit unhappily), Cross becomes smitten with Kitty. Unbeknownst to him, Kitty already has a beau: low-life Johnny Prince (Dan Duryea). And it isn't long before Kitty starts playing Cross for all he's worth. (Rule of thumb for film noirs: never trust dames in tight dresses.)

Lang has contributed his fair share of films to the noir genre. (Other titles include M and The Big Heat.) So how does Scarlet Street compare to his more famous titles? Being a post-war noir, it explores more on the matters of sexual desire and moral ambiguity. It also shows how you shouldn't believe everything you're told.

And the performances from Robinson and Bennett are fantastic, providing a nice foil for each other. His meek to her brash, his feeble to her loud. (In fact, a later scene between them is reminiscent of a similar interaction from Of Human Bondage.) You see such foils frequently but seldom with the woman in the crasser role.

Scarlet Street is definitely one of the more underseen titles of both Lang's career and the film noir genre as a whole. Thanks to the work from Robinson and Bennett, it's the kind of film that's one hell of a character study. Also, the ending's one of the finer examples of cruel, cruel irony.