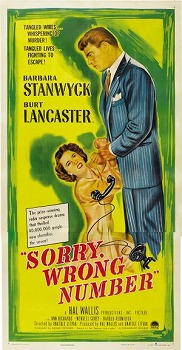 Anatole Litvak's Sorry, Wrong Number opens with invalid heiress Leona Stevenson (Barbara Stanwyck) trying to get in contact with her husband Henry (Burt Lancaster). She overhears a conversation between two men plotting a murder over the line. Panicked, she tries to find answers.

Based on the radio play by Lucille Fletcher (she also wrote the screenplay), Sorry, Wrong Number isn't Stanwyck's usual fare. Yes, she's dabbled in her fair share of film noirs but she's far from her usual role of the femme fatale. Very far from it.

Also a familiar face to noir is Lancaster. Bear in mind Sorry, Wrong Number came only a few years after his debut in The Killers so Hollywood didn't particularly know what to do with him just yet. That said, however, it's clear early on that Lancaster knew how to make his presence known.

So what about the film itself? Set in almost exact time, Sorry, Wrong Number shows how a reduced production can be damn effective. (It's primarily set in Leona's bedroom.) Yes, some scenes stray away from the bedroom but does that lessen the film's quality? Not in the slightest.