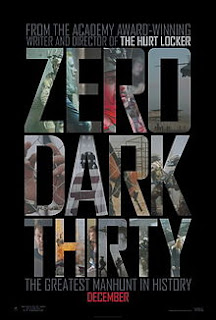 With all of these post-9/11 war-themed films, there's always a common theme among them. And that is they always brutalize the facts. Those films are usually more interested in bloodshed and a large body count. (Probably just to attract a male audience.)

Kathryn Bigelow proves she's one of the boys with her new film Zero Dark Thirty. She's not here for the carnage. She's here for the facts and boy, does she deliver. (She also shows the balance between story and style with no problem whatsoever.)

Much like her previous film The Hurt Locker, Zero Dark Thirty is unbelievably tense. The number of scenes where I felt my heart stop is...actually, I lost count after a while. Anyway, the point is Bigelow really knows how to keep her audience on the edge of their seats.

The star of Zero Dark Thirty is Jessica Chastain, who has definitely made a name for herself these last few years. I've seen a few complaints along the lines of Chastain not doing much here in the way of acting. To which my response is: are you fucking blind? She says so much just in the way she holds herself. To me, that's a legit actress. (That said, she's not my frontrunner for this year but I'll be happy if she wins.)

Zero Dark Thirty is filmmaking at its most determined. Not since Francis Ford Coppola made Apocalypse Now has there been a film willing to venture into material Hollywood so often stays away from. Bravo, Ms. Bigelow. You've showed Hollywood who's boss.