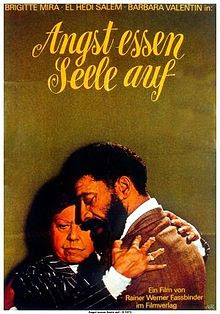 Love. We read about it, hear about it and sometimes witness it. But rarely do we actually experience it. The very fortunate get to experience true love at least once in their lifetime.

With Emmi Kurowski (Brigitte Mira) of Rainer Werner Fassbinder's Ali: Fear Eats the Soul, she finds love twice in her life. First with her now-deceased husband, now with a young Moroccan named Ali (El Hedi ben Salem). Of course this new union has caused a bit of an uproar with Emmi's family and friends.

As most people (well, cinephiles) know, a heavy influence for Ali: Fear Eats the Soul was Douglas Sirk's All That Heaven Allows. The premise is similar: a widow starts a relationship with a young man, stunning those closest to her. Granted, Mira and Ben Salem aren't exactly Jane Wyman and Rock Hudson in the way of looks but they definitely make up with talent.

The premise isn't the only shared link between Fassbinder and Sirk's films. Both films are set in a time where acting outside of the social norms will brand you a pariah. (Fassbinder's film is set in socialist Germany; Sirk's in 1950's America.) Like that remotely bothered the leading ladies.

Ali: Fear Eats the Soul is a film that's both familiar yet new to me in the way of its style. (Mind you, this is the first Fassbinder film I've seen.) I have a very strong feeling that more of Fassbinder's work will be in my future. Why? The man knew how to make a film, that's why.

My Rating: *****
Posted by MovieNut14 at 11:18:00 PM
Email ThisBlogThis!Share to TwitterShare to FacebookShare to Pinterest
Labels: 1970s, movies, reviews