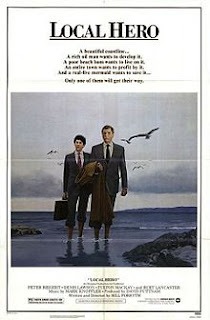 You can't help but feel a little sorry for "Mac" MacIntyre (Peter Riegert) at the beginning of Bill Forsyth's Local Hero. He's only been assigned to scout a small town in Scotland because of his Scottish heritage. The only problem is that he isn't Scottish, so he'll basically be a fish out of water.

But Forsyth doesn't make his film the typical "fish out of water" story. Early on, Mac adapts to the lifestyle of the Scottish tow. He doesn't struggle with either their ways of living or their accents. He just sees as down to earth living, a stark contrast of his high-functioning life in the States.

The actors are unique. Not long after his success in Animal House, Riegert shows a calmer side to his acting. He's not swarmed by many big names. (The only actors I recognized were an aged Burt Lancaster and a young Peter Capaldi.) Many of Riegert's co-stars are unknowns, and I think that aides the film a bit. Instead of having numerous actors to keep track of, you have a few recognizable names to remember.

And I have to talk about Chris Menges' cinematography. The way he captures the Scottish landscape is absolutely gorgeous. And his frequent use of silhouetting the actors against the night sky is also very lovely.

I very much enjoyed Local Hero. What sounded like a complex story is actually something quite simple in depiction. This is something I've always said and it's something I'll keep saying: sometimes you just need a good story to make a great film.