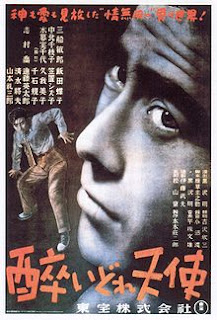 A Streetcar Named Desire. La Dolce Vita. Mean Streets. Some Like It Hot. These are the films responsible for starting famed actor/director collaborations. It's hard to say if the world of cinema would've been the same without them.

One such collaboration is Akira Kurosawa and Toshiro Mifune. The most famous entries of their sixteen film collaborations were those of the samurai genre (Rashomon, Seven Samurai). Those were the films that rightfully earned them (and Japanese cinema in general) worldwide recognition.

Their first film wasn't one in the samurai genre. Instead, it was a crime (or, more accurately, yakuza) film called Drunken Angel. Many themes of Kurosawa's later films, but there's one aspect of Drunken Angel that's very prominent: the way Mifune channels his character's rage.

An amusing note on the characters Matsunaga (Mifune) and Dr. Sanada (Takashi Shimura). Both have their respective vices (Matsunaga living it up, Sanada drinking) yet they have no intentions whatsoever to limit them. Even when Matsunaga is diagnosed with tuberculosis (and Sanada's a doctor, for crying out loud).

Drunken Angel not only shows the beginning brilliance between Kurosawa and Mifune, it also displays to the fullest the backdrop of a recovering Tokyo. That's thanks to Takeo Ito's meticulous eye. If you're a fan of Kurosawa like I am, you'll definitely love Drunken Angel.