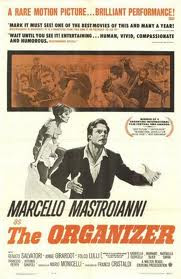 When it comes to Italian cinema, the types of films most people think of are the surreal worlds of Federico Fellini or the lush costume dramas of Luchino Visconti. Very rarely does one think of the neorealism films of Italy.

Only the true cinephiles recall the films that immortalized Vittorio De Sica and Roberto Rossellini. Alas, those are the only names brought up when neorealism is discussed. (Fellini and Visconti also made films within this genre as well.) A lesser-known name of Italian cinema also contributed to the neorealism genre. His name was Mario Monicelli. The film was The Organizer.

Headlined by Marcello Mastroianni, the film focuses on the factory workers of late 19th century Turin and the impending strike between them and their bosses. Tensions rise as they try to make negotiations. (It's easy to see how this got overlooked; it was released the same year as another film starring Mastroianni. The film? 8 1/2.)

Even though Mastroianni gets top billing, he's not actually the star of The Organizer. (He doesn't show up for some time in the film.) The stars in fact are the workers. (It makes sense when you know the actual title translation.) The unadulterated frustration among them resonates on screen. That said, Mastroianni also delivers a fine performance.

The Organizer may not be the best film to come out of Italy, but it's certainly one worth seeing. I'm usually not much for films on social perspectives, but this was quite good. Now I want to see another film of Monicelli's. Hmm, Big Deal on Madonna Street looks tempting...