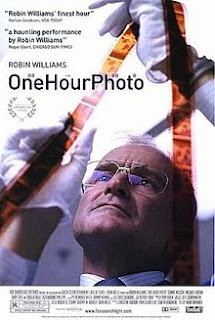 Every day we carry on a life that looks stable and not out of the ordinary. Those that see us know nothing...unless they really know who you are and what kind of life they lead.

The thought of an outsider knowing everything about your personal is enough to send chills down your spine. Just imagine how the Yorkins feel in Mark Romanek's One Hour Photo. They have absolutely no idea that their lives are being watched. But by who? Sy Parrish (Robin Williams), a photo technician of the local department store.

Sy is the the textbook example of a sociopath. He can appear very friendly to the outside world. But his mind is a much darker place than anyone could imagine. No remorse, no regrets, no nothing. Sy makes Patrick Bateman look like a wimp.

And man, the way Williams plays Sy makes it even more unsettling. This is definitely one of the best examples of a comedian playing it straight. Forget Good Will Hunting. This is the film that should have earned Williams his Oscar.

One Hour Photo definitely shares elements of Psycho and Peeping Tom, but it's really in a class of its own. Of course it's not as great as those two films but it is quite good. It's clearly a reminder that looks can be very deceiving.

My Rating: ****1/2
Posted by MovieNut14 at 9:53:00 PM
Email ThisBlogThis!Share to TwitterShare to FacebookShare to Pinterest
Labels: 2000s, movies, reviews