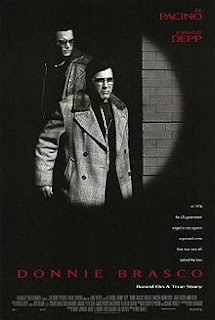 Funny, isn't it? Donnie Brasco, one of the best films about the American Mafia, was directed by the British Mike Newell. (Then again, many directors of Hollywood's Golden Age were born in various European countries and could depict American life with no problem.) Anyway, onward with the review.

Starring in the title role is Johnny Depp, who at the time was at the height of his stardom. It's a role like this that prove that Depp is a legit actor, not just a pretty boy movie star. (If only Hollywood itself would pick up on that.) Seriously, someone give him a good script again.

Depp's co-star is Al Pacino who, like Depp, is in dire need of a good script again. I mean, everyone knows he's a great actor. And again, his work in Donnie Brasco proves it. There has to be someone in Hollywood that still has faith in him.

Much like Brian De Palma's Carlito's Way (which also starred Pacino), Newell depicts 1970s New York City with ease. This isn't the world of sharply-dressed gangsters that's mostly associated with the genre. These gangsters are much more...casual.

Anyway, Donnie Brasco is pretty great though not as great as, say, Goodfellas or Once Upon a Time in America. It's mostly because it loses steam towards the end. Still, Depp and Pacino's performances ensure that this is a film very much worth a look.

My Rating: ****1/2
Posted by MovieNut14 at 11:25:00 PM
Email ThisBlogThis!Share to TwitterShare to FacebookShare to Pinterest
Labels: 1990s, movies, reviews