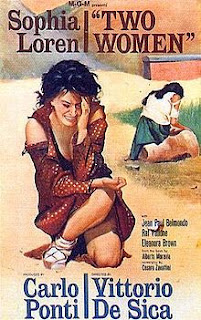 For every country in the world, there are several actors and actresses from there deemed sex symbols by fans from all over the world. Spain has Penelope Cruz and Javier Bardem. France has Marion Cotillard. (And don't even get me started on the United Kingdom.)

This has also pertained to foreign film stars of cinema past. Alain Delon, Catherine Deneuve, Marcello Mastroianni...they were the most popular for both their looks and talent. Another is Sophia Loren, more noted for her curves and age-defying beauty. (Hard to believe she was seventy-five when she made Nine.) Fortunately she's also known for her abilities as an actress as well.

The best proof of Loren's talent is in the form of Vittorio De Sica's Two Women. Playing a woman struggling to survive World War II with her daughter, Loren showcases a nuanced ability that's quite common among most screen beauties. (Another good example is Marilyn Monroe.)

De Sica was essentially immortalized for his neorealism films like The Bicycle Thief and Shoeshine. Two Women shares many elements of those films, but it doesn't feel as emotionally invested as those two. Still, De Sica shows he knows what he's doing.

Two Women may not be the best foreign film but it's certainly a compelling one to watch. Just watching it makes it clear as to how Loren won the Oscar. If you can get a hold of a copy of this, be sure to watch it.