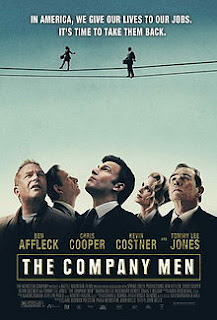 During the opening credits of John Wells' The Company Men, we get a glimpse into the lives of Bobby Walker (Ben Affleck), Gene McClary (Tommy Lee Jones) and Phil Woodward (Chris Cooper). They look pretty well off: big houses, expensive cars, the works. Their lives look solid.

Well...for a while anyway. Later that same day, Bobby becomes one of the company's latest layoff victims. Gene and Phil in turn become worried about the state of their careers. Will they soon become the next targets of layoffs?

Bobby does manage a stable life following getting laid off. (Well, at least in the first few months.) But then the going gets rough for both him and his family. Thanks to both Wells and Affleck, the ordeal Bobby and his family goes through is one of the more mature depictions of harsh reality.

Sure, there have been a number of films about the recession within the last few years with most of them being relatively the same. Granted, The Company Men falls into that territory in a few scenes. So what makes it different? Wells doesn't sugarcoat the details.

All in all, The Company Men is very good but not completely brilliant. In several years' time, I can imagine it being on one of those "films that defined the decade" lists. But for now, I can only see it as merely a well-acted film released at the right time.

My Rating: ****1/2
Posted by MovieNut14 at 11:14:00 PM
Email ThisBlogThis!Share to TwitterShare to FacebookShare to Pinterest
Labels: 2010s, movies, reviews