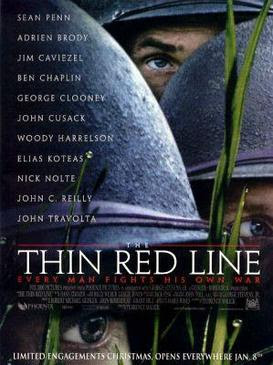 1998 had two big name World War II movies released. Those were Saving Private Ryan and The Thin Red Line. There has been debate on which is better, but I can't say which one is better just yet.

In 1943, the first major US offensive of World War II is drawing to a close on the South Pacific island of Guadalcanal. To put an end to this campaign, the United States Army arrives with a full division of troops and equipment, deployed to break the last resistance of the Japanese. The exploits of the division are seen from a number of perspectives amongst the soldiers to include war weary Sgt. Welsh (Sean Penn); power hungry Lt. Col. Tall (Nick Nolte); Pvt. Witt (James Caviezel), who has known only desertion and AWOL; and Capt. Staros (Elias Koteas), who is struggling with his abilities as a leader.

The cast for The Thin Red Line is star-studded. Along with Penn, Nolte and Caviezel, the cast includes Adrien Brody, John C. Reilly, Woody Harrelson and John Cusack in supporting roles, and John Travolta, Tim Blake Nelson and George Clooney in bit parts. Most war movies are excellent character studies since they show what a certain character does in a situation where their life literally depends on it. And The Thin Red Line is just that. Terrence Malick's eye for beauty in every image just blew me away in this. War is hell, but there is also a beauty in it.