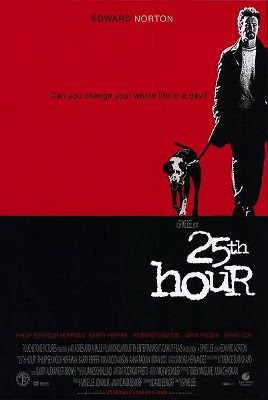 Spike Lee is known for directing movies that emphasize life in urban neighborhoods, stuff you can relate to. Not things that couldn't happen in real life. Lee is one of the few directors who gets the right dose of realism in their movies.

Drug dealer Monty Brogan (Edward Norton) has only one day of freedom before heading off to prison for seven years. Prowling New York City until dawn with friends Jacob (Philip Seymour Hoffman) and Slaughtery (Barry Pepper) and girlfriend Naturelle (Rosario Dawson), Monty re-examines his life and how he got into his predicament.

Oh man, where to start? I love the shots during the opening credits of the lights signifying where the World Trade Center once stood. There is also a really great shot from Slaughtery's apartment of the remains of the Twin Towers. Those images show how affected Lee was with 9/11. The score by Terence Blanchard is excellent, as with Norton's performance. Norton's best scene is where he gives a f-bomb filled rant (has to be one of the most explicit pieces of dialogue I've heard in a movie). 25th Hour is an underrated from Lee that shouldn't be ignored. At all.